Last year’s SPC left a lot to be desired as far as I was concerned.  I didn’t want to spend another cent on this conference, but I wanted my Vegas experience.  Well I got it this year, in bucket fulls!

A much easier registration process than past year, cool bag, water canteen and stickers to swag up your bag.

The wifi was an utter disaster area.  I don’t understand why they try and force 10000 people onto 2 wifi accounts when just about every single vendor had their own wifi account.  Surely if everyone shared the load it would have worked better?  I know it costs money to do that, but just build it into the sponsorship packages.  The wifi did come right the last 2 days, but by then Microsoft was crucified for the lack of connectivity at a major technology conference where the key focus was services in the cloud!  It was the same story last year. When will this be sorted out?

A nice addition was a Microsoft shop – although it was hidden away right in the back of the exhibit hall where people seldom walked, and the opening hours were really dumb.  That shop should have been right at the entrance with long opening hours and they would have sold out everything.  My favourite new toy is the laughing man stress ball.  Plus I got the old arc mouse that’s been discontinued, which is great seeing as the new arc mouse is horrible!

The staff at the event were just incredible!  Such a pleasure to meet such friendly and accommodating people.  We just wanted to pack them all up and take them home.  Well done on finding the very best staff to man this event.  These two guys in particular, absolute rockstars! 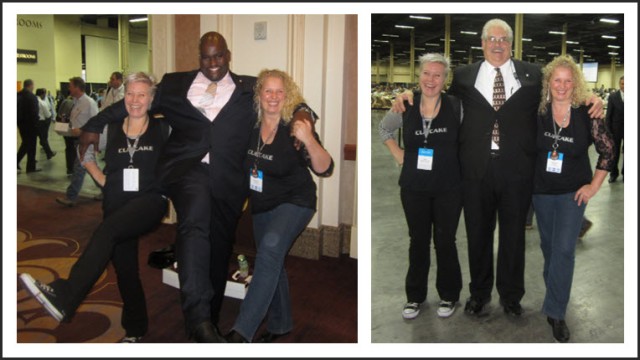 Nothing to write home about, just like last year.  It never ceases to amaze me how bad the standard of presenting is at this conference.  This is supposed to be the best of the best, top of the food chain content and presenters, but again I walked out of sessions.  Not as many as last year, but it still wasn’t great.  Barring a couple of presenting legends, the rest should not have been on that stage. There was also a ton of duplicated content – is there no moderation of content going on behind the scenes?  I expect better at this level I must say.  Someone said that we don’t go to these things for the sessions – but last year I sure did and was bitterly disappointed.  What about all the people that don’t drink and socialise or know anyone?  They are there for the sessions and this is the standard they are receiving?  It’s not on.  I heard that speakers are chosen by politics; seriously Microsoft, that has to stop, it’s embarrassing.

The huge community wall mural was just spectacular!  I also enjoyed the timeline wall.  Meeting a bunch of new community members was a joy and what these events should be about!  The lovely Rebecca from Australia absolutely made my day!

What I didn’t like was the fact that the Community Hub wasn’t allowed to be at the Community Lounge – some or other politics issue.  Really people, we need to get over this politics thing and focus on communities.  There were 10 times the people crowded into a tiny Community Hub stand manned by Bonnie Surma, Mark Miller and Joel Oleson, where this enormous Community Lounge was mostly empty, used by people to rest their feet and not actually engage in a conversation.  I loved the survival bracelet concept in the Community Hub!  What a great way to engage people and get them talking.  SharePoint TV was kinda cool, although I never got to see any of it cos I couldn’t find the channel.  I believe it will be on Youtube soon.

There are no words to describe THE AvePoint Red Party!  I have never been to an event like that in my life and it was the true Vegas experience I was waiting for. Well done for putting up a very slick, sexy and amazing event that made me smile for a week!

The Jon Bon Jovi concert on the beach was cool, mainly cos we could get in the water and get really close to him.  He totally destroyed Living on a Prayer by turning it into a ballad, but a good time was had by all.  The fireworks display afterwards was totally unexpected and had me teary-eyed at how spectacular it was.  The party ended very quickly though and moved straight back to Eye Candy where we pretty much camped out.

The Axceler party was ok, lovely venue but very crowded.  The appearance of Pamela Anderson caused a huge stir, but unless you were in the front row of the dance floor, you didn’t get to see much.

Vegas is enormous!  There were countless people hobbling around with sore feet and legs – including us.  If you’re going to attend these events, I cannot stress enough how important it is to book early and get a spot in  the hotel where the event takes place. AND have the most comfortable padded shoes you can get! Yes it’s expensive, but just suck it up and pay, because you will walk 100 miles otherwise and it can ruin the experience.  Even inside of Mandalay Bay we walked kilometres to get from door to door.  Funny though, even though our feet were broken, one night of dancing at the Red Party and we were magically cured! 😉

Seriously people, there are 10 000 delegates from 85 countries at this conference. If you can’t handle your alcohol – don’t drink.  Try to remember that you are representing yourself, your company and your country.  Vomiting in a dustbin, picking fights, picking up chicks when you’re married and getting caught on camera, then insisting that photos and videos be taken down because of your bad behaviour is just not on.  Be a professional at these events, know your limits and stop lying to your spouses about what you do at conferences.  What happens in Vegas is going to stay on Facebook, Twitter and Youtube despite your outcries.

Would I Go Again?

It really is very very expensive for South Africans to go to these types of events, (19 of us went this year, a new record!). It was awesome to have a travel buddy this time which helped in having an amazing experience.  I doubt that I will attend another one.  While it was wonderful to see all our online friends again, there are other conferences where the content is better and adds more value to my life.  I had a really really good time, an unforgettable experience that’s going to be very hard to top.  But been there done that twice now.  Time for something else I think.

13 responses to “The #SPC12 Conference Wrap-Up”