Settling Down – One Month In

One month today since moving to The Right Fork.  Things have started to settle down and a routine established. I started a Facebook page to document the day to day happenings of transitioning to the life of a future urban off-gridder who runs an IT business.

Sleep is slowly but surely getting better.  No more waking up with the 2:45am bird rising. It’s just the 6am dog barking that I need to still get used to.  Mozzies are driving me insane, BUT my clever friend Chantal told me about Doom Mozzie Room Spray – 100% odourless!  I am not a fan of chemicals of any kind, except now…

Changing from a night owl to an early morning person is becoming easier all the time.  I end up doing so much in the mornings and by the first time I look at the clock, it’s only 9:30am and I’ve had a couple of hours to do my own thing already. That’s starting to become more and more appealing to me.

I have only moved once in a decade, so I’d forgotten what this little exercise can cost. I’ve been haemorrhaging money the past month getting settled, moved and bonded for the next 50 trillion years. The first time all the house and policy debit orders went off, I had to go have a very large glass of wine to calm down! Is this how everybody lives?! And I don’t learn!!! A trip to Builders Warehouse is fatal!  On the bones of my ass and I had to have these. Why?  Because they just make me smile so much! 🙂  Say hello to Cheech and Chong. The patio is officially full (thank goodness), so I can stop spending money now.  If you are planning on following suite here, save up some money so that when you move, you can get the things you need and want without freaking out about it. I did have some saved, but it was woefully inadequate.  Save R100 000 or more.

With the end goal of an urban food forest in mind, and no experience in this field; a lot of time is spent just sitting.  Sitting on the patio and staring at the garden. Then walking around the garden and watering it, then just sitting and staring again. Picking up a few books for inspiration.  More sitting.  Not much has happened inside the house because I have no clue how to decorate a Cape dutch styled home yet.  And because I moved from a small flat to a big house, I am very short on furniture and decor type stuff.  Mommy lent me some curtains at least, but in some rooms I have blankets held up with pegs as curtains for now, very sexy that is… 😀 One thing at a time and I don’t want to rush things and make expensive mistakes. 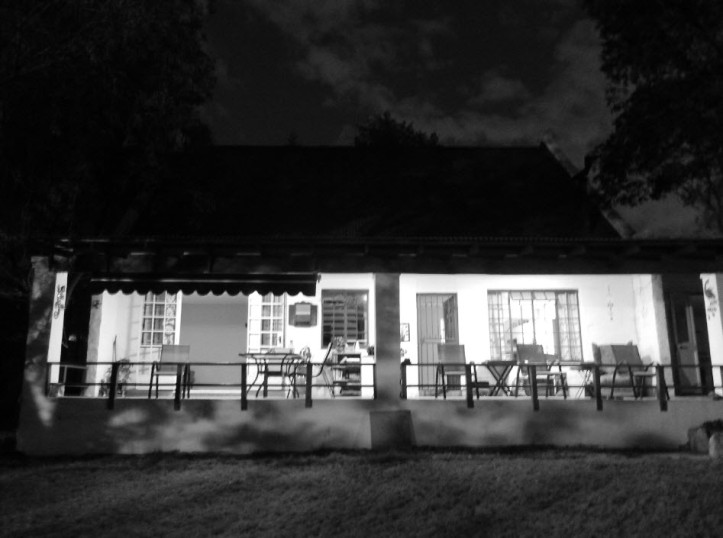 There is a design flaw in the house I have to fix.  In your face, brighter than the sun, street lights that flood the entire property. it doesn’t work for me at all. All manner of solutions have been discussed from shooting the light out, to painting the cover black, putting in dense trees, solid wood walls, screens, creepers, etc. We are going to try a something in December to fix this, because try to braai on the grass isn’t nice with a blinding orange light in your face from all directions. In the meantime, I’m going to find the people in charge of street lights and ask them if they can change the globes to green.  You never know hey.  I have no idea what department is in charge of those, we’ll see what Mrs Google says.

Nothing like attending a gardening event to get inspired to get moving in the garden though – the first plants went into the ground this weekend and the first fruit trees bought.  So far : lawn chamomile, goji berry, hot ‘n spicy oregano, ginger rosemary, cleveland sage, cape gooseberry, blackberry, blueberry, apple mint, normal mint, lemon verbena, citronella, brown fig, peach, plum, grape and nectarine.  My lovely friend and industry colleague Lizl is also into this and brought me cherry tomatoes, onions, chillies, squash and coriander.  I asked for advice on one of the permaculture Facebook pages sometime ago about where to start. Someone replied and said, “find something you like to eat and stick it in the ground”.  So that’s what I did.  I have information overload after 2 years of research and it ended up freezing me into inaction because I was scared of doing it wrong. Still, doing anything badly, is better than doing nothing well, so we’ll see how these guys turn out.

There is some or other fruit tree already in the garden much to my surprise, donno what it is yet.

And the resident scrawny lemon has the teeniest, tinest baby lemons on it! So excited about those! 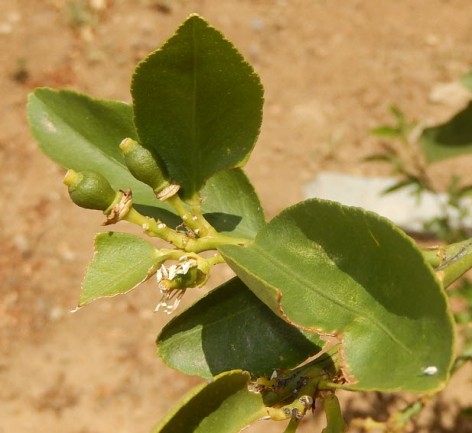 I’m not winning with the grey water and rainwater systems yet, I just don’t have enough know-how and that could be a very expensive mistake to make, so I’ll call in the troops when I have money again.

A lot of time is spent taking photos of everything, which has only lead to utter frustration at my current camera!  Do you see how this goes?  Owning a house / farm is fun, but it’s gonna cost you boy… But it’s so hard to resist; the endless quest for the perfect pics.  However, I think it’s important to document this journey so that those who follow in the footsteps have some point of reference. That’s my story and I’m sticking to it. 🙂 One always thinks they’re out their doing and thinking things alone, but it’s not true.  Many think and feel like you do, you just gotta find them.

The sunsets! Ah the sunsets!  5:30pm to 7pm is my other favourite time of day! And plus I get to hear peacocks calling in the distance as they settle down for the night, I love it!  I then sit on the patio to have dinner and light candles and just enjoy the evening and listen to the frogs calling in the distance.  I decided that just because I’m single, doesn’t mean I have to miss out on that stuff, so now I treat myself. No more TV dinners for me!

The bird list is picking up nicely!! The bird books, binocs and bird seed are regulars on the stoep. Here’s the locals so far:

The social life has picked up too – I actually have one now, which is quite a new sensation for me.  I know a lot of people, a lot!  And people seem to think I spend a lot of time partying and going out.  Nothing could be further from the truth.  I keep to myself mostly and rarely go anywhere socially.  I decided to change that once I moved.  And so far I have had things to do and places to go every single weekend. Much better!

I’ve met some of the neighbours.  They pop in and visit at random.  One lady Marilyn has lived her 47 years – she’s a wealth of information and she is becoming a new friend. There’s always something going on in the neighbourhood and always someone available for a chat. I didn’t expect that, I must be honest. It’s a pleasant surprise.  Lovely Marilyn rocks up here one day in her very cool cow bakkie and brings me a chair that she doesn’t want anymore. Just like that!  So now the chair lives on the patio and I sit in it and read gardening books. And you know the best part?  It actually rocks, literally! 😀

And that’s been the last month. No regrets so far, I am loving my new home!  Been getting lots of fresh air and exercise and feeling much better already.